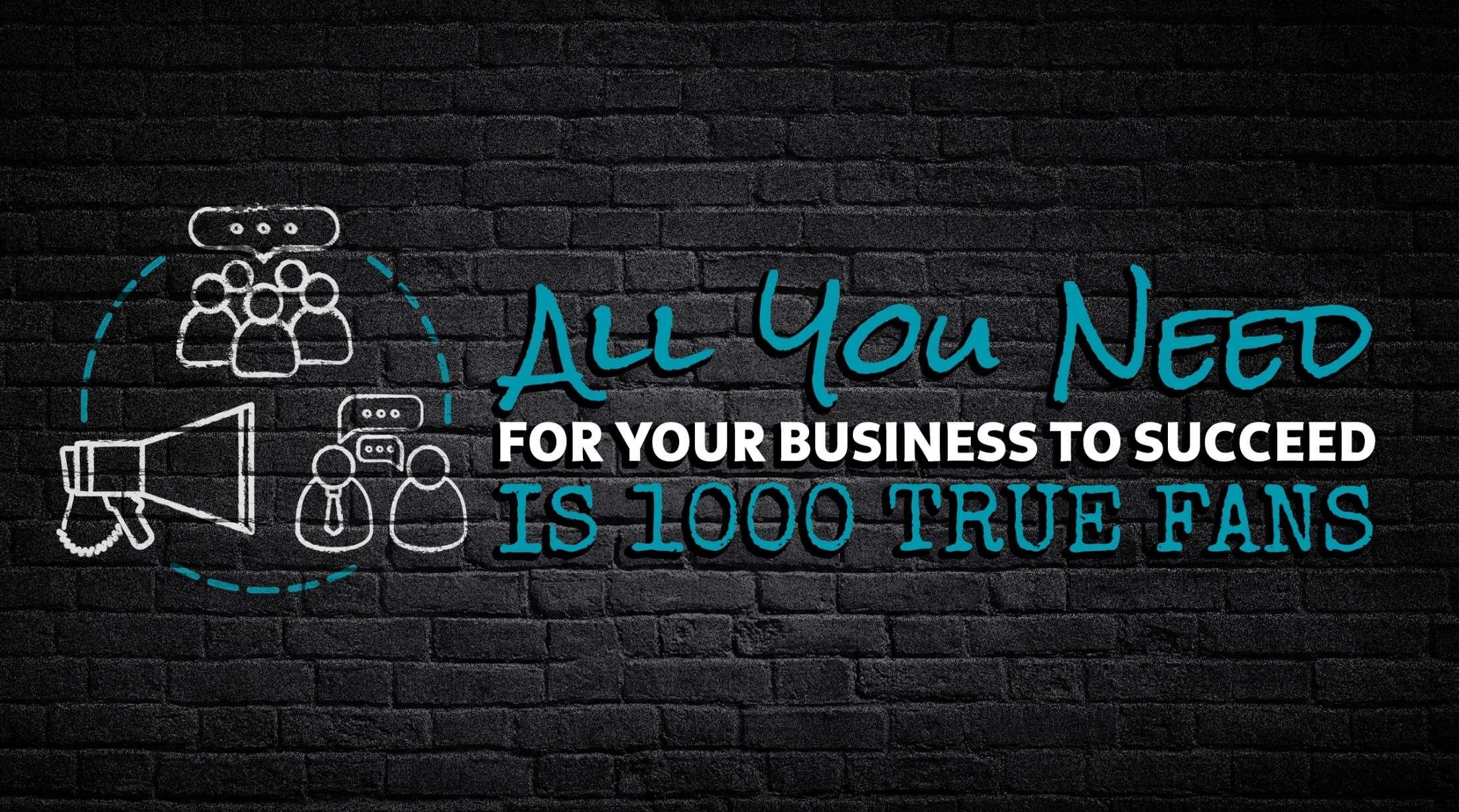 If you’re an online entrepreneur, one of the most important things you need in your business is a loyal fan base. These are the people who are your buyers, your marketers, and your defenders all rolled into one. Here's how this works.

This title might sound unrealistic, but it’s true. If you’re an online entrepreneur, one of the most important things you need in your business is a loyal fan base. These are the people who perform a three-part role: they’re your buyers, your marketers, and your defenders all rolled into one.

I owe a great deal of my success to people whom I call my true fans. But, to be honest, it requires work to bring together this valuable group of people. You have to create, cultivate, and nurture your fan base. That’s why finding, attracting, and cultivating your 1000 true fans is one of the most important things you need to do as an online entrepreneur. Without these people, your business will struggle.

How does FREE lifetime access to ALL of my online courses sound? You’ll find courses on marketing foundations, legal foundations, financial foundations, messaging, email marketing, list building, and branding. I’m even working on more courses to add. Just click here to sign up.

The 1000 True Fans Concept: What It’s All About

This concept of 1000 true fans was originally proposed by Kevin Kelly, one of the founding editors of Wired Magazine. He put out this idea in 2008, and he’s since revised it, but he summarized it this way:

The concept began with Kevin Kelly’s idea that if you had 1,000 people who would be willing to pay you $100 every year, you’d have a six-figure business.

What Makes A Fan A True Fan?

The way Kelly described it, a true fan is one who will buy anything you have to offer. These are the people who will buy your greatest hits record even though they already own all your other records.

The Power of True Fans

As you work on building your audience, you want to focus on quality over quantity. You want to attract people who will be excited to do the following.

They Will Buy Anything You Have To Offer

This is the most obvious one, and this is what Kevin Kelly was talking about—true fans will buy anything you have to offer. To use a Jerry Maguire quote, they’re the people who will tell you, “You had me at Hello.”

In other words, when you tell them you have something available, you don’t even have to finish what you’re saying, they’ll say they want to buy it.

If you’re not there yet, I understand that you may say that will never happen. I thought that way too, but I will tell you, it can happen.

True Fans Are Your Marketers

These people don’t just appear out of nowhere. You need to take the time to cultivate your true fans.

True Fans Are Your Defenders

You can expect your true fans to become your defenders. For example, if you get to the point that you have Facebook ads running, you’ll have people say mean things on those ads. Your true fans will respond to those comments and defend you.

True fans have your back and take the burden of responding to mean people off your shoulders.

How Many True Fans Do You Really Need?

With true fans, you’re going to have buyers, marketers, and defenders. They’re all those things wrapped into one. But how many do you need?

Although the concept is 1000 True Fans, you don’t need one thousand of them literally. This isn’t about the number of people on your list or your social media following. This is something deeper. Your true fans are a much smaller percentage of your total list or your total following. We’re talking about your “ride or die” fans.

The good news is, you don’t need millions of true fans. You might not even need a thousand of them. Depending on your product mix, you might only need a hundred. If you have 100 true fans who will buy anything you put in front of them, you’re going to have a super successful business.

Let’s do some math, using my product mix as an example.

In the process of trying to find and cultivate 100 true fans, I’m going to appear on other people’s radar screens, and they’re going to become a casual fan who may not buy everything I offer but will buy something. If we can convert our casual fans, we’ll be on our way to a seven-figure business.

To Be Successful, Make Cultivating Your True Fans A Priority

You need to put cultivating your true fans at the top of your priority list. I’m not saying you can’t sell to other people or develop a product. But the first thing you need to do is cultivate a fan base. You’ve got to do that before you can get traction.

To be completely honest with you, I didn’t do this right, initially. I first created a product, a course called Safeguard Your Online Genius. The course was a flop. I did it wrong because I bought into this notion that if I create a good product, people would come. It doesn’t work that way.

Things shifted for me when I decided to focus on building my fan base first. When I started to connect with people, things changed. That’s when people started wanting to buy from me.

I don’t believe you should build a product if you don’t yet have at least some semblance of a following. You don’t necessarily have to be at the point of having 1000 true fans or 100 true fans, or whatever number of raving fans before you start that process. But you’re going to have to build that fan base before you can successfully launch an online product.

There are going to be people who have a product that because of what it is, is just going to sell. But for most entrepreneurs, people are going to buy from you because they like you or connect with you. That means you must cultivate relationships. The good news is you don’t need millions of fans.

If you want to have a base of true fans, you need to establish strong connections, which isn’t easy. You can’t delegate, automate, or templatize this process of connecting with your fans. You just can’t. You’ve got to do the work and show up. It has to be you. There are four steps to creating true fans.

Try to become a storyteller. If you can tell stories that are relatable so that people can connect with you, that’s going to make a huge difference. Aim for authenticity. Talk about things that are going on with you, your failures in the past, as well as your struggles and how you’ve overcome them, etc. When you do this, people will relate to you.

You must find where your people are, such as what social media platforms they’re on. You should listen to them and understand what their challenges are. That work is important.

3.   Bring People Into Your World

The next step is to attract people. You can do that through social media, your email list, and your Facebook strategy, among others. Basically, you want to get them into your world, whether organically or with paid ads. Just be sure you take the time to attract people the right way rather than spammy tactics.

This last step, nurturing and connecting, is what a lot of people miss.

For example, many attract people to their email list during a product launch. I’ve had this happen to me so often. I’d get emails from people I hadn’t heard from in months, and I’d realize that I was on their email list from a launch. The only time I hear from them is when they want me to buy something from them. Guess how many of these people I’ve bought from? None.

Why would I buy from them? If I didn’t buy the first time, and I haven’t heard from you in six months, why am I going to buy the second time I get an email? I’m not!.

You’ve got to spend time nurturing the people you’d like to be your true fans. Besides sending emails to people on your list, it also involves other things like engaging with them in Facebook groups or other places where they’re spending time there, and building connections.

When you start doing those kinds of things and engaging with people and connecting with them, that’s where someone goes from just being a person on your list to a true fan.

It’s in the virtuous cycle of cultivating relationships and connecting with people where the magic happens. When you start building connections, that’s when you’ll create true fans. Find your people and then nurture them. That’s how they will go from someone on your list to a true fan.

But at the end of the day, the most important thing is that you have to focus on creating your fan base first. Make that mindset shift, and you’ll be better off. I can say, unquestionably, that cultivating true fans is the driver behind my success. I hope you’ll take the time to do the same.

If you want to learn more about online marketing, be sure to join me inside BADA$$ Online Marketing University (BOMU). This is my FREE signature program designed to help entrepreneurs like you run their online businesses the right way.