Begin With The End In Mind: 4 Mistakes To Avoid in Your Online Business 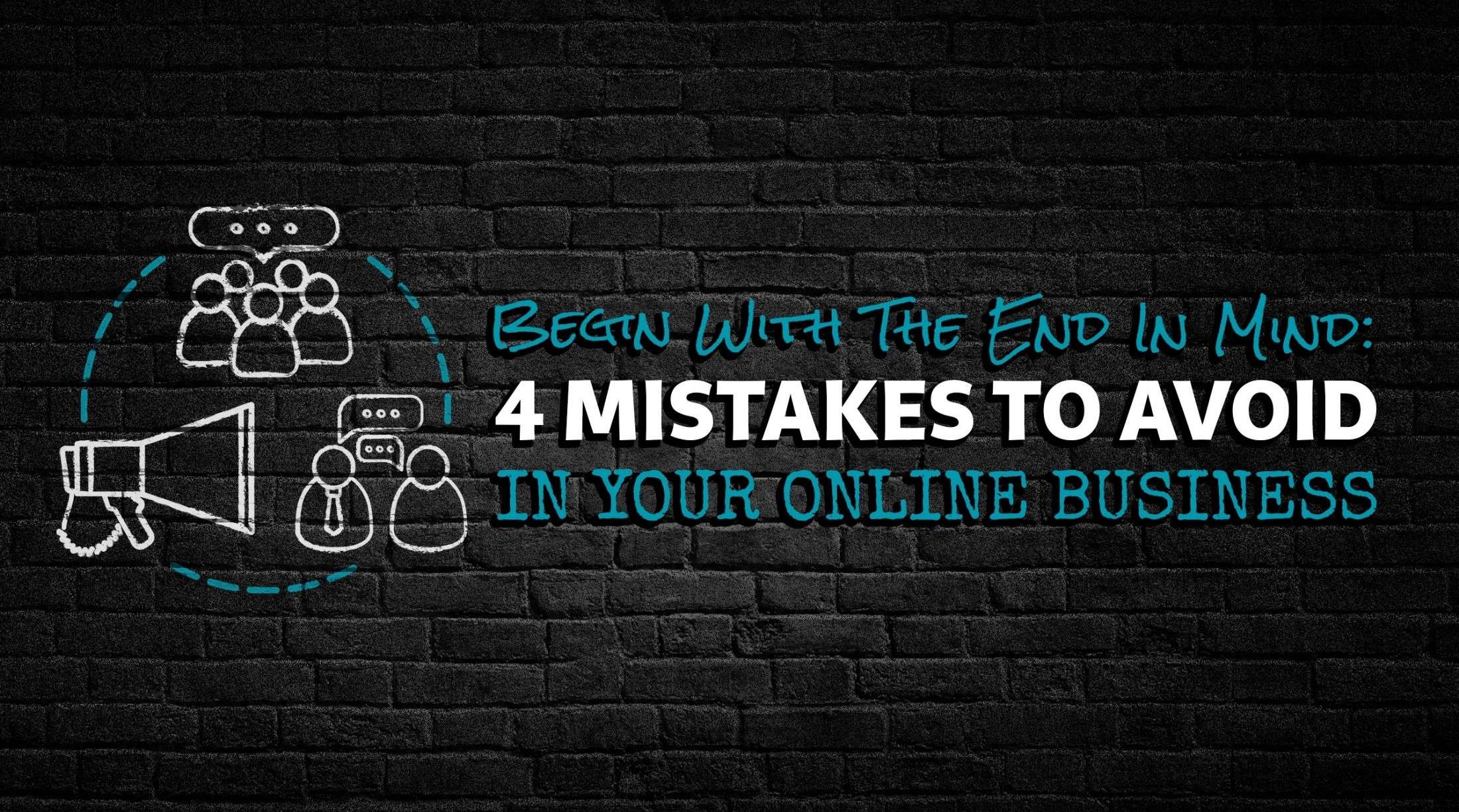 There's an important principle we need to adopt in our businesses: begin with the end in mind. In this post, we'll see how this concept can help us build a successful business.

There’s an important principle that we’ve all probably heard about but don’t live by: begin with the end in mind. It comes from Stephen Covey’s book, The 7 Habits of Highly Effective People.

But here’s the rub… as often as we’ve heard that rule, the reality is we’re not living by it. Seriously, so few of us are actually doing that in our business and it’s holding us back.

Many times, we entrepreneurs get tied up with details about product launches, getting leads, and so many other tasks that we miss the proverbial forest for the trees. There may indeed be a million things to do to make our business successful that we forget a crucial thing.

The principle of “Begin with the end in mind” is really about aligning everything in your business.

In this post, we’ll look at some real-life examples where not following the principle of beginning with the end in mind could hurt our businesses. Then we’ll consider what we could do differently.

How does FREE lifetime access to ALL of my online courses sound? There are courses on marketing foundations, legal foundations, financial foundations, messaging, email marketing, list building, and branding. I’m even working on more courses to add. Just click here to sign up.

Mistake #1: Creating Freebies Or Building Lists With No Role In The Customer Journey

One of the mistakes that so many of us make is that when we’re trying to build an audience and build a list, we just go off and create freebies. We put a ton of time and effort into them without even thinking about what we’re going to offer at the end.

When I first started doing this stuff, I made the same mistake. I was creating freebies without thinking about how this freebie was going to relate to what I was going to offer and sell down the road.

If your freebie isn’t aligned with what you have to sell, or if it’s not something that will move a potential buyer forward in their journey, then it’s not helping your business.

It might bring someone in but not move them forward on the journey that they need to take to go from lead to buyer.

Another example is launching a freebie that’s laser-focused on your offer right before your product launch. Contrary to what some folks out there advise, you should introduce laser-focused freebies way before you’re ready to open your cart.

I made this mistake early on. One of my freebies was about how to get stock images that you can use that have the right kind of license. It’s a great freebie and provides a ton of value. But then it hit me: Is that a freebie that’s going to lead people to buy a legal template from me? Probably not.

So again, when it comes to creating freebies, begin with the end in mind, and that means thinking about what you have to offer at the end and making sure your freebie is aligned.

Another way that many entrepreneurs aren’t beginning with the end in mind is with content.

In creating your content, you should first think about what your offer is. You also need to think about your positioning.

How do you want to position yourself in the market? You need to create content that will position you the right way.

Oftentimes, we get sucked into creating content without truly thinking about positioning.

Mistake #3: Not Asking The Right Question

Oftentimes, we miss the forest for the trees. We do this because we’re not asking the right question.

I’m going to give you an example that hopefully will help you understand what I’m getting at. In January of 2019, I did a webinar launch of my Online Genius Template Library, which is the all-access pass to my legal templates. In February I attended my first mastermind retreat. My question was, “How should I improve my webinar funnel the next time?” because I planned to do it quarterly.

But I was asking the wrong question. The right question would have been, “How do I improve my launch and make more money the next time I launch the template library?”

Let me explain why this was the right question. Because I was so focused and fixated on this particular way of launching, I was missing the clues that suggested a webinar wasn’t the best way to launch my product.

This better question is what led to what became my signature thing last year—the “non-launch launch”—where I simply sent emails, made just as much money as with a webinar, and spent no money on ads.

It was an insight I could only have when I backed away and stopped asking, “How do I have a more successful webinar” and instead asked, “How do I make more money with less effort?”

Even if you’re an advanced entrepreneur, this can probably happen to you. You get fixated on where you are. You’re worried about what you’re doing.

Oftentimes, what you need to do is step back and go to a higher level of abstraction. But more importantly, you must ask the question, “What is my ultimate goal here?”

I’ve heard people in this situation ask this question, “Okay, well, so what should I do on segmenting my list?” That’s the wrong question.

The right question is, “How do I make more money from the leads who are already in my funnel?” It might be about segmenting or simply adding a nurture sequence that gives them another opportunity to buy later.

The key is you’ve got to ask the right question, and oftentimes the question is going to be how you can sell more with less effort or less stress.

You need to get to that level of abstraction. Figure out what your goal is and ask that. That’s the reframe I encourage you to make.

Mistake #4: Not Asking This One Question Often Enough

We’re not asking this one question often enough: “Where do I want to be in a year?” Or, if we do ask that question, we don’t align what we’re doing today with the answer.

I’m guilty of this as much as anybody else. And I want to be very clear. I’ve never had a one-year plan where a year later I’m actually there. I have a vision for where I want to be in a year, but oftentimes, I’m not even living up to that because I’m continuing to do things based on where I am right now.

If you expect to potentially pivot or add a business line, say in six months or so, you must start thinking today about how to get there. You need to ask yourself, “What do I need to be doing today to position myself for that in six months (or in a year)?”

Once you know what you need to do, you’ve gotta take action. And that means stepping back and asking whether what you’re doing now (status quo) is helping you get to where you want to be in a year.

The Key To Success

My call to action to you is simple: Begin with the end in mind.

Have that as your North Star. Constantly ask yourself: Where do I want to be? What is my goal? What do I want to achieve?

Let these questions be the guide for your decisions on what you ought to do at the moment. That is the key to ultimately becoming successful.

In the meantime, I want to invite you to join BADA$$ Online Marketing University (BOMU). It’s my free training program where you’ll the right way of building an online business that thrives.