Make This Mindset Shift To Break Free From The Status Quo 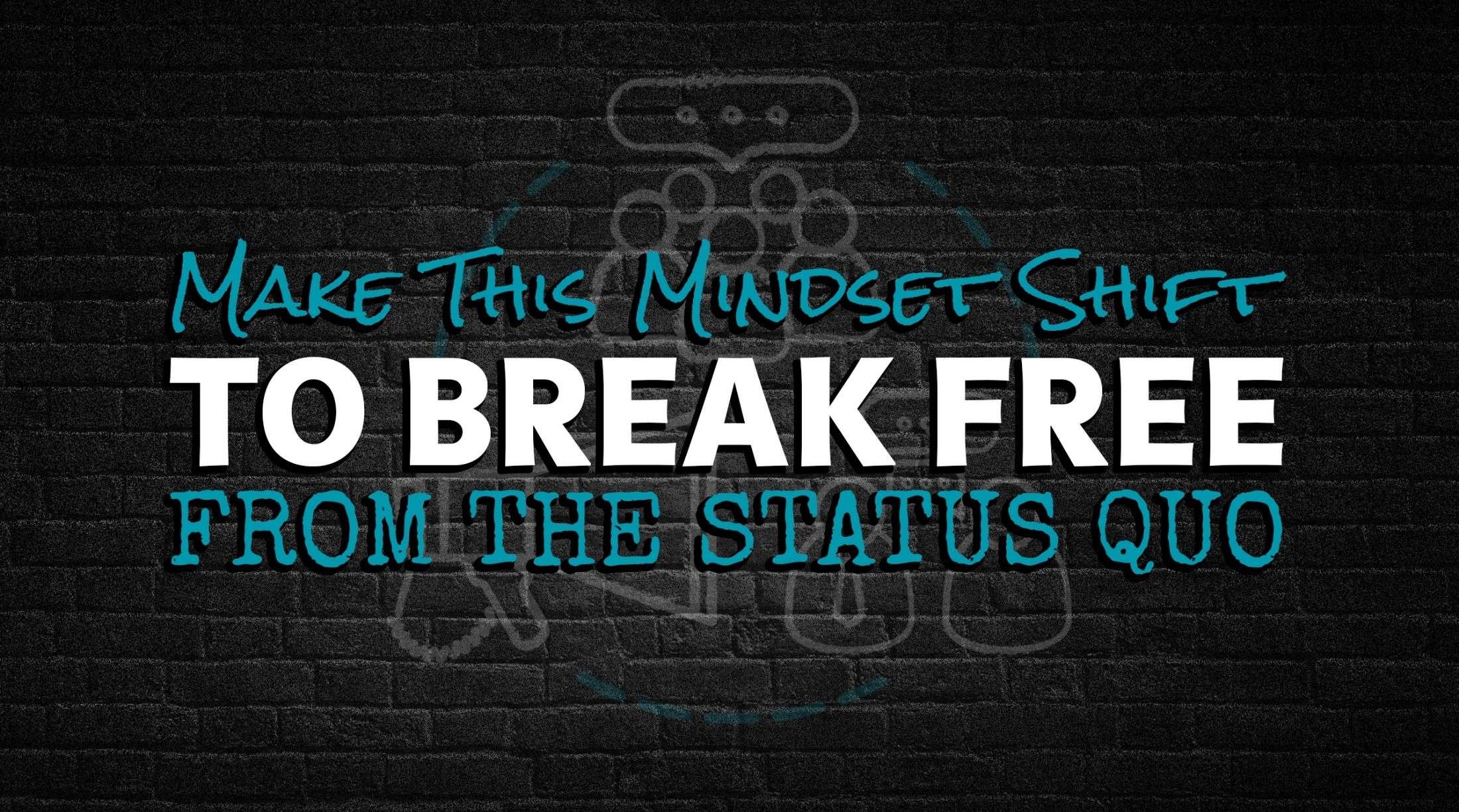 Stuck in the status quo? I’m sharing a mindset shift and some questions to ask yourself to help you show up in a way that is aligned with your values.

If you’ve been following my blog for a while, you’ve probably noticed that I tend to debunk a lot the conventional wisdom in the online marketing space. What can I say? I’m a bit of a rebel.

But I realized there was something I was doing that was out of alignment with the way I want to show up to my audience. As I thought about it, I realized that the reason I was doing it was because that’s what I had been taught. I was just following the status quo.

Besides owning up to my mistake, I also want to talk about how the status quo is hard to give up. I’ll also share a mindset shift to help you figure out where you might be doing that too and how to get out of it.

So here’s where I screwed up: my guru rants. It’s where I deconstruct all the different problems I see in the online marketing space. I realized that I was doing it wrong because I was basically just doing the status quo and following the advice that I’ve been given without even realizing that’s what was happening.

What I figured out was that it came from the conventional wisdom that I learned when I entered the online space. One of the things I was taught early on was that it helps to have a villain, an “us” versus “them” in marketing.

I don’t remember exactly where I picked that up, but when I think about it now, screw it, I don’t care if it actually works as a marketing technique because it’s not consistent with my values.

It’s not consistent with what I believe I should be doing as a person. I believe we need less us versus them and we need to get away from tribalism. I’m sorry that I followed this idea.

I shouldn’t have made it seem personal and instead should have talked about ideas. Moving forward, I’m gonna talk about ideas and how I believe a marketing concept is wrong, and I’m not going to personalize and rant about gurus.

Why You’re Working On Autopilot

The mistake I was making happened because it’s so hard to break out of the status quo. That’s one thing I want you to understand. The reason is very simple: most of us are operating on autopilot.

A lot of things that we’re doing regularly, like commuting or driving to work, have become second nature to us that they just happen automatically. Most of the time, we don’t notice them or pay much attention to those things because we’re on autopilot.

That happens in our business too. There are things that we’ve been taught that just become second nature because they’ve become so ingrained. They’ve become dogma.

So you need to figure out the things that you’re only doing because that’s what you were taught. Then you can decide whether you should keep doing that or rethink the status quo.

When you’re on autopilot, you stop asking why and you stop asking questions. If you’re doing something in your business, I want you to ask a very simple question: “Why am I doing this?”

“Because so and so told me to” is not a good enough answer. You should understand why and be able to say if it makes sense to you or not.

“Just because that’s how it’s always been done” isn’t the right answer either. You need to ask deeper questions and know why it was originally done that way. You need to understand the basic rationale for doing it that way.

Weed Out The Things You Shouldn’t Be Doing Anymore

When you’ve figured out the basic logic, you can do the work of weeding out the things you shouldn’t be doing anymore. Here are two filters you can apply:

Is this reason consistent with marketing fundamentals?

You’ve got to ask yourself if the reason for what you’re doing is consistent with marketing fundamentals. If it’s not, let it go.

You need to understand that marketing isn’t all about selling. It’s about building connections, relationships, recognizing the value and interconnectedness of everything you do, and taking stands on things that matter to you.

Is the reason you’re doing something in your business consistent with marketing fundamentals? If not, don’t do it.

Is it consistent with your values?

The next question to ask yourself is whether the status quo you’re practicing is aligned with your values. Is it consistent with the way you want to show up in your business?

You might be able to make more sales, at least in the short term, by doing some things that aren’t consistent with the kind of person you want to be in this world. But can you put your head on your pillow at the end of the day and say, “I can live with myself. I’m doing what I should be doing in this world, and that’s more important than making every last dollar.”

You should have core values for your business, but some of them are just as much about knowing what you believe to be right and wrong. When you’re building a business that is consistent with your values, things get easier because you don’t have to hide.

Often when something feels difficult in your business, it’s because there’s something out of alignment. Finding where things aren’t aligned is an important part of building a business that you will actually love building and running.

So, figure out where things aren’t clicking aren’t working and ask questions. It’s not an excuse to avoid the hard stuff, but if it’s not in alignment with your values, figure out how you can do something else that is aligned.

If you need more help breaking free from the status quo and understanding the fundamentals of marketing, you should join my totally free program, BADA$$ Online Marketing University. This is my signature course where I teach you what you need to know to build a successful online business.