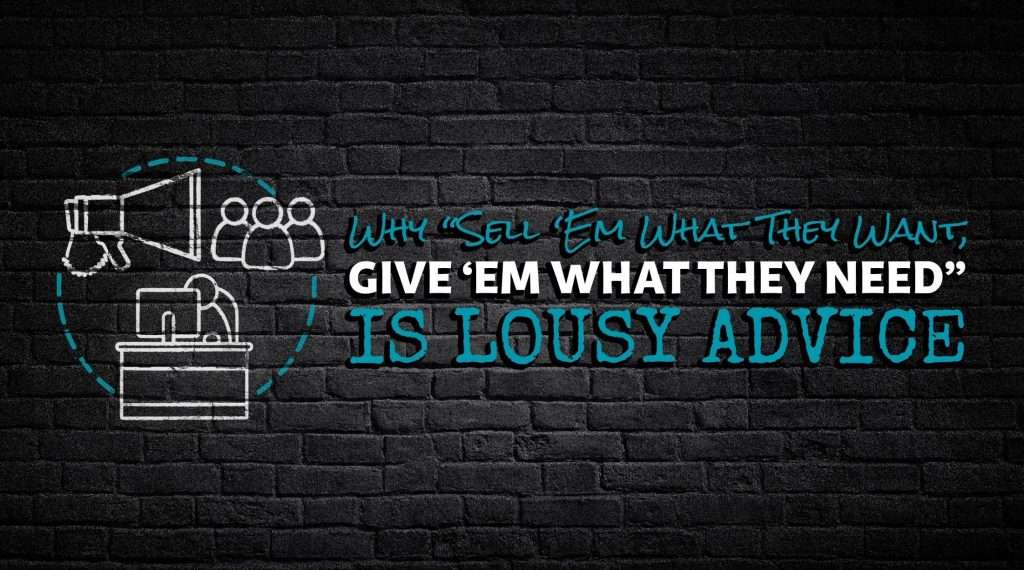 “Sell ‘em what they want, give ‘em what they need” is a popular concept in the online marketing world. In this framework, marketing gurus teach that since you can’t sell people something they don’t want, we should instead cast our product in the mold of what the people want and then sneak in what people really need as part of the product.

This isn’t horrible advice, but it also isn’t great. “Sell ‘em what they want, give ‘em what they need” is a myth. What’s more, there are a couple of holes in it that if you were to follow this advice, you could actually harm the people you’re selling to.

Let’s talk about why you shouldn’t follow the “Sell ‘em what they want, give ‘em what they need” advice. But more importantly, I’d like to share with you what to do instead so that you can break through the problem of people not wanting what you sell.

The example situation when you shouldn’t follow the advice to “Sell ‘em what they want” is when what your audience wants is not good for them.

For example, in my case, I’ve had a lot of people suggest to me that I should create plug-and-play email templates because there is no doubt that I could bring in more leads and bring them in more cheaply if I did that. Most people want quick-fix solutions, after all.

However, I know that a template won’t be appropriate in all contexts, and using it may not give the audience the results they want. So if I did give my audience a template, such as a Mad Libs-like version of email marketing with email templates where all they had to do was fill in the blanks, I would be hurting them. It would also hurt my business over the long term as well because I wouldn’t be able to move them along into higher-level products, having disappointed them with bad results at the start.

So what do you do if your audience wants something that you know isn’t good for them? There are two main ways to address this.

Commit To Being A Thought Leader

If you believe that what people are asking for is not what they actually need and that it’s potentially harmful to them, what should you be doing? Simple: you have to commit to lead and be a thought leader who will tell them, “This is not what you need.”

I’m doing exactly that. The messaging in my business is very different from what other people in my field are saying. So while a lot of other marketers may be churning out how-to content and Tiktok or Reels videos, I’m the outlier who’s saying that that’s not where your focus should be.

Instead, my advice is that if you’re an online marketer, you need to stop focusing on tactics and individual strategies and start thinking more broadly about your business, about marketing, about all the things, and understand how they all fit together.

It’s admittedly a very different perspective and it’s something that a lot of people don’t want to hear. My outlier messaging may mean that I’m going to have fewer people on my list, fewer people following me, and that’s okay with me. I’m fine with this because I don’t care about having a huge number.

I want to have the right people who are willing to do the hard work and take my advice when it comes to these things. And if I’m not willing to take a stand and commit to being a thought leader on these things, I’m not going to attract those people… and the same goes for you.

Be Willing To Take A Stand

If you actually believe that what your audience wants is not what they need in a very fundamental way and that giving them what they want could actually impede them, you definitely need to be willing to take a stand.

Examples of situations where it’s important to take a stand when something people want is affirmatively harmful to them abound in spaces where there’s a lot of noise, like in diet and fitness and online marketing. These are the places where a lot of people are talking and trying to give quick fixes. If you genuinely believe that some things are not good for your audience, be clear about it and say, “That’s actually harmful.”

When Your Audience Really Needs But Doesn’t Want Your Product

Now, what should you do if it looks like people are never really going to want what you’re offering them even if you believe they need it?

Well, I’m going to use my legal stuff as an example. Now, there are a few online entrepreneurs who want it, but the reality is that most people never really want to deal with the legal stuff. There’s a lot of stuff like that in our businesses that people don’t want to spend their time doing, even though they’re things that have to be done.

This situation will most often come up if what your product does is preventing something bad from happening in the future. These products are just hard to sell because people can’t envision bad things happening to them. It’s tough to make the case for products like these.

However, just giving up on your advocacy isn’t a good plan because that would be bad for your audience. If you want to serve your audience, you must get them to accept and do the things that they need to do. This brings me to my next point.

Build Connections With Your Audience Before You Sell To Them

What could you do if your problem was how to convince your audience that they must do certain things because not doing so could lead to bad consequences?

Well, you focus on connecting with your audience at a deep level. You need to spend time nurturing, talking with, and building up relationships with the people in your audience. Think about it, if some random person on the internet says, “You need this,” you’re probably not going to listen.

But if someone that you have come to know, like, and trust tells you, “You need this,” you’re more likely to believe them. You won’t feel like it is just a ploy to get you to buy something you don’t need.

Most people in the online marketing space are focused on converting people. Online marketing is notoriously conversion-driven, i.e., bring them in, convert them, and sell to them again. That’s the common approach.

You have to bring people in, connect with them, get them to see you as someone who is not a fly-by-night company but someone who is trying to help them do what is best for their business. When you build strong connections with your audience, they become the people who don’t just buy from you once but over and over.

Building connections with your audience gets you to the point where you don’t have to think about selling all the time. You don’t have to constantly focus on conversions because you’ve already done the work to build relationships.

Also, spend some time listening to what your audience wants as part of building connections. Marketing isn’t just us talking. An equally important part of marketing is listening to what we are hearing in the marketplace. That can be directly from our customers, but it can also be in other places. Spend the time, be present with your people, and listen to what they say.

Sometimes, you may have to tell your audience they’re wrong. Do it nicely, of course. If they have a wrong notion, especially if it’s going to have bad consequences for them, you must be willing to say that they’re wrong. It’s part of your being of service to your audience.

If you do the work of committing to be a thought leader, sharing what you believe in, and connecting with your audience, selling will become effortless.

If you want to learn more about how to market to your target audience the right way, I have an amazing free resource for you. Join BADA$$ Online Marketing University and check out our courses on online marketing fundamentals, email marketing, and more. They’re totally free (seriously!) and are designed to help online entrepreneurs grow their businesses. 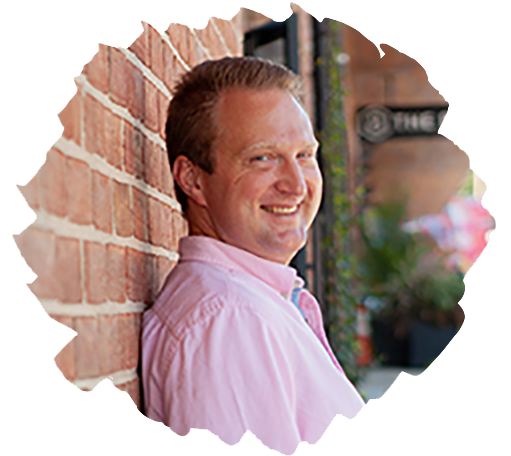