Why You Should NOT Launch A Scaled Program Right Away 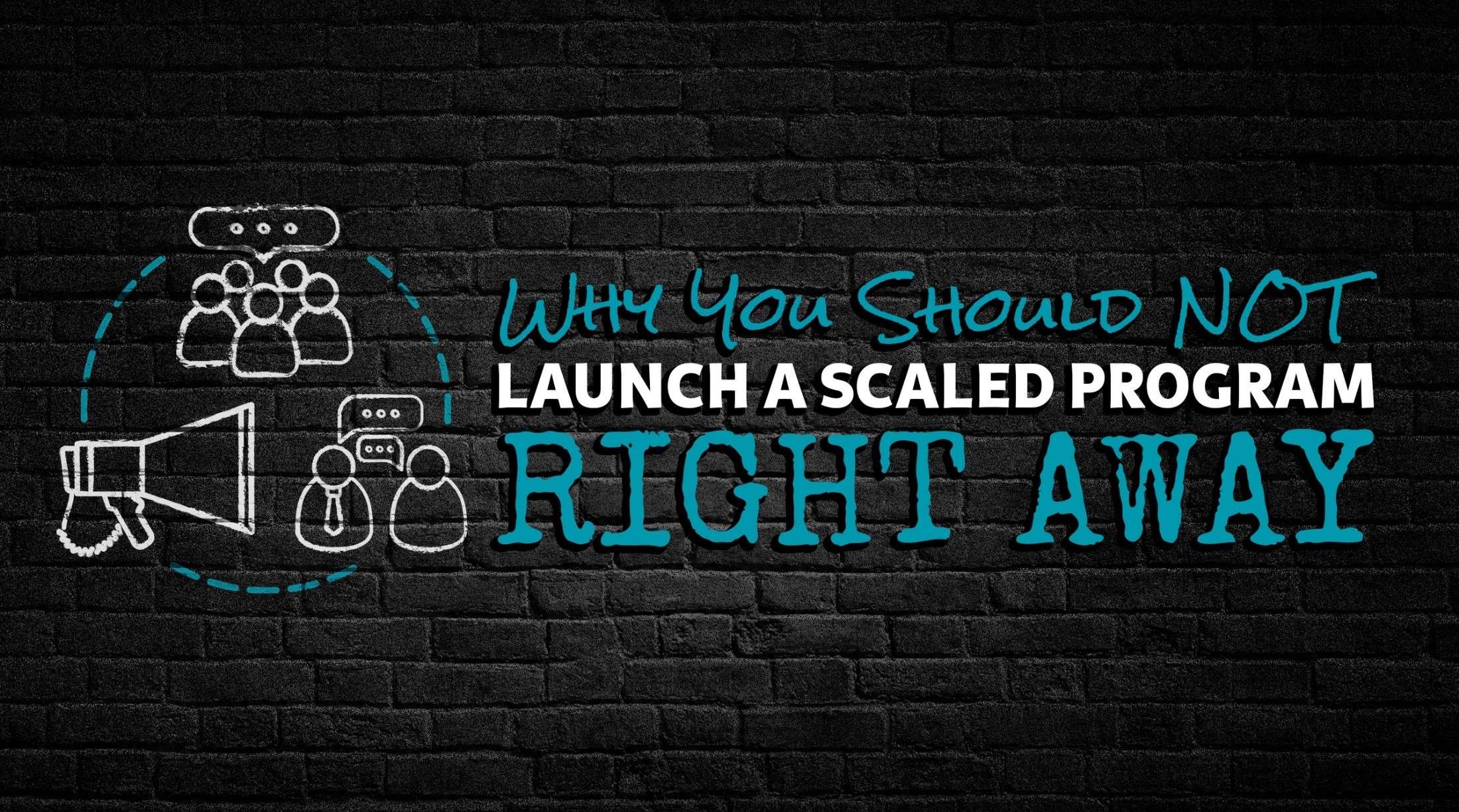 I’m going to say something really unpopular... you shouldn’t consider creating a scaled program until you have at least 1,000 people on your email list. In this post, we'll look at why.

In the online marketing space, you’ve probably heard gurus encouraging you to create a scaled program like a course, membership, or group coaching program. They tell you to jump in and start right away.

But should you? What is the right time to launch a scaled program?

How does FREE lifetime access to ALL of my online courses sound? You’ll find courses on marketing foundations, legal foundations, financial foundations, messaging, email marketing, list building, and branding. I’m even working on more courses to add. Just click here to sign up.

Look, I’m going to say something really unpopular, but it’s the truth… you shouldn’t even consider creating any of those scaled programs until you have at least 1,000 people on your email list.

Everyone thinks they’ll be the exception to the rule and be successful even without a list. And let me clear, there are a few crazy success stories out there. But these results aren’t typical. The problem is you don’t hear the stories of all the people who try and fail.

Instead, you often hear this message, particularly from people trying to sell a course about creating a course: “This will work even if you don’t have a list.” Then they pull out a case study of someone who did have success starting with quite a small list.

I’m not saying that it’s impossible to successfully launch a scaled program without a sizable list, but I’m going to tell you that the chances of it happening are so low that you’re better off putting in the work to build a solid foundation for your business. Case studies tend to feature the exception to show that it can work even if you don’t have an audience.

They’re not. You’ll hear them suggest building your list through launches and using Facebook ads to get leads and try to sell them. But there are a couple of reasons this isn’t a great idea.

Compared to leads that you bring in without any kind of sale, launch leads are more expensive. Getting someone to download a freebie is way cheaper than trying to get someone to come to a webinar or launch event. In fact, it’s typically five times as expensive!

Why would you want to build your list using the most expensive way to get leads?

The Reality Of Cold Traffic

Now if there were a chance that you could convert a good number of those people, that would make sense. But in reality, trying to convert a cold lead is going to be freaking hard.

It’s hard for everybody, but it’s extra difficult if you’re just starting and you haven’t dialed in your messaging. You’re paying a premium, and your chances of converting cold leads right away are close to zero.

Another reason not to use launches to build your list is that cold leads are more likely to unsubscribe.

If you’re launching a scaled program, you should assume your existing audience is the people whom you will primarily be selling to.

You Need An Audience to Sell To

Why should you wait until you have at least 1,000 people on your list to launch a scaled program?

Because you need an audience to sell to.

Also, if you’ve just started, chances are that you haven’t dialed in your messaging yet. When you’ve built up your messaging muscle, you can deliver and help people understand why they might want to buy your product.

It’s not necessarily a magic number. For some people, the minimum might be 2,000 or 750 people. But 1,000 is a good round number that we can look at today. That’s a good threshold.

You Need to Know What Your Audience Wants

It’s in building, nurturing, and engaging with your audience that you’ll know what they want you to sell to them. Consider these questions:

How Do You Know What To Create?

If you don’t have a list, how do you even know what to create? How do you know what your audience wants?

Until you have an audience of people whom you can get to know and get feedback from, you wouldn’t know what type of program they want.

You might be planning to create a course, but what if your audience wants a membership? Or a group coaching program? Or maybe they don’t want any of that.

What Topic Does Your Audience Want To Hear About?

Having a list first will also allow you to know what topic to talk about. Within your area of expertise and subject matter knowledge, what particular topic do people want to learn from you? What do they want to learn and what will they sign up for?

If you don’t have an audience, you wouldn’t know all that. You’re going to make a guess and test your beliefs and perceptions.

Until you get the feel of things and see what people are responding to, you won’t have a clear sense of what topic people most want to hear from you.

What Messaging Angles Will Work?

When you build your audience, you’ll know what messaging angles will work with them. There are countless ways you can come up with messaging angels for any given product, and you’ll have to figure out over time the ways that will convert.

If you try to launch a course or product without knowing your audience, you’ll also be figuring out your message at the same time. But if you build your list first, you can test your messaging and figure out what people respond to.

Starting early with scaled products ends up wasting time, energy, and money that you should be spending on other things. Instead, you should focus on building your audience.

Think about it this way: if you’re outside on a sunny day, the sun is going to be hot, but it will not burn anything. But if you use a magnifying glass and focus it on a piece of paper, it can start a fire.

That’s the power of focus. Just as it’s important to focus on one thing at a time, focusing on the RIGHT thing at any given time is also important.

If you’re launching a scaled program without an audience, you’re focusing on the wrong thing.

Creating and launching any kind of scaled program is hard work. Everything you do, from figuring out your messaging to creating the program itself to marketing, takes time, money, and energy.

So, if you do these without a list, you’re spending your time, money, and energy on the wrong thing.

The problem with early launches of scaled programs is that they can kill confidence because of all the reasons we’ve talked about above.

I’ve heard it over and over again from entrepreneurs. They internalize a failed launch, and it doesn’t matter how much other people tell them it’s not their fault. They internalize it because they’ve tried several things that didn’t work. It feels like a failure and kills people’s confidence. People start saying maybe they’re not cut for this or that their offer isn’t right.

I’m going to tell you, we have no idea if the offer was right. If you only have 50 people who see the offer, you’ll have no idea whether it’s not right.

You’ll not know until you can get enough volume, and that’s why you need to have an audience before you can make any judgments.

It’s Not Your Fault

If you created something, launched it, and it didn’t work, that doesn’t mean you’re bad or that you failed.

Your mistake probably is that you listened to people who were selling to you because of their interests.

So, stop putting the cart before the horse. You shouldn’t even think about creating a scaled program until you have at least 1,000 people on your list.

Focus On The Fundamentals

Until you’ve built your list to at least 1,000 people, here’s what you should be focusing on: building all the fundamental parts of your business.

You need to build a website that’s designed to convert, set up your email sequences, create a landing page, and so on. You have to build the traffic by creating content and being on social, then converting them to leads.

I’m not saying you can’t sell anything until you have 1,000 people on your list. You can do one-on-one coaching or provide other one-on-one services if you want to. That’s a great idea because you’ll get a lot of insight from working with them. But until you’ve built your list, you shouldn’t create a scaled program of any kind.

If you don’t have a list yet, you can learn how to build one when you join BADA$$ Online Marketing University (BOMU). This is my FREE training program where you’ll get access to full courses that will help you build your online business.